by Jared HendersonPosted in Uncategorized

The next major version of WordPress, version 3.5, is scheduled to be released sometime in the next fortnight. By far, the most significant and noticeable change in 3.5 is a complete re-vamp of the WordPress media uploader/inserter.

The old, familiar media upload/insert popup screen looks like this: 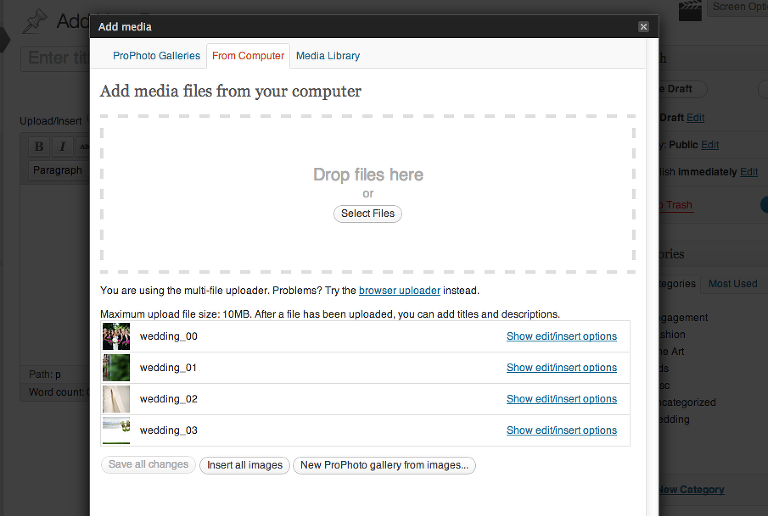 The new, improved media upload screen will look like this: 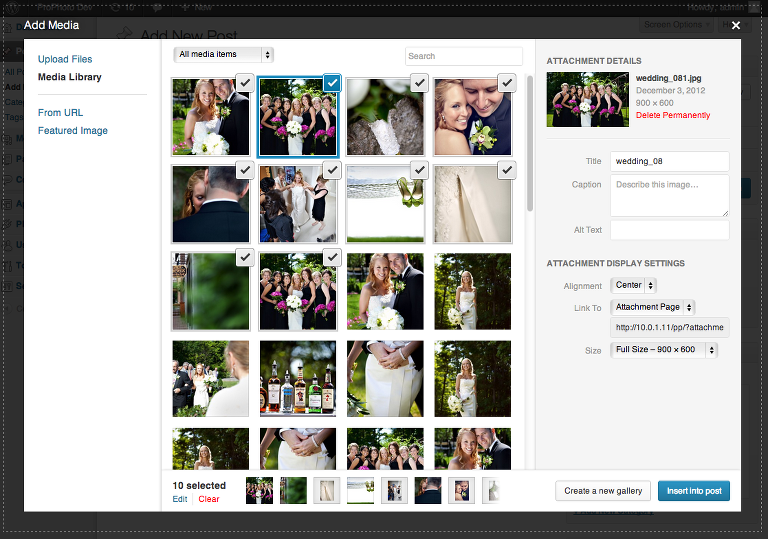 The new UI looks like a pretty big improvement over the old style. It’s much bigger, more usable, and has some cool built-in features like gallery reordering, multiple image selection. It even allows you to insert multiple images directly into your post at one time with a single click. Oh wait, we did, that’s been in ProPhoto for nearly 4 years as the much-beloved “Insert all” feature.

Ah, but there is a bit of bad news. The new media uploader is so fundamentally different from the old one that it breaks almost all of the custom functionality that we’ve built into the upload process. That means just about everything related to creating, editing, managing, and inserting ProPhoto galleries doesn’t work in the new screen.

We’ve known about the upcoming changes to WordPress for weeks, and it was clear early on that we would have the major issues we’re now facing. The way we looked at it, we had two options going forward:

Ultimately, we decided on the second option. What does that mean exactly? It means that right before WordPress 3.5 is released, we are going to push an auto-update to ProPhoto that completely disables the new media uploader, and substitutes the old one. Everything will work exactly as it always has, including all of your ProPhoto gallery management features. The only downside is that you won’t get to use the new and improved uploader for a time, and any plugins you are using that hook to the new uploader will not function correctly.

Then, in about 3-5 months, whenever WordPress 3.6 is ready (the next major version after 3.5), we will also be ready with another auto-update which will re-enable the new media uploader and make ProPhoto full compatible with the new UI and features. So you will get all the shiny new goodness of version 3.5’s new media uploader, just a few months behind the rest of the world.

But why not now?

The reason we are opting to wait a WordPress release cycle before supporting the new media uploader is that this new functionality represents the one of the most significant changes to WordPress that we’ve seen in 5 years. It’s not just an incremental improvement over the last upload screen, they threw everything out and started over, which we think was a good idea. It also means, however, that the feature is likely to be a tad unstable for the first few months. We expect to see a number of bug-fixes, enhancements, changes, and theme/plugin integration hooks added within the first couple months after 3.5 is released.

Because of that expectation, we felt it would be a waste of our time and development resources to code for the new feature now, when in all likelihood it will be evolving pretty fast even after it’s release. Much better, we feel, to wait for them to work the kinks out and then thoroughly prepare a robust patch that works well and will be stable and as bug-free as we can possibly make it.

What you need to do:

Basically, you don’t need to do anything. Sometime in the next week or two you’ll see that WordPress 3.5 is released. When you see the notification, you can upgrade right away. We will have pushed an auto update within hours of the release, so your ProPhoto site should have already updated. You can then take advantage of some of the other features of 3.5, but the media upload will just silently go on functioning as it has for all of time. Then, sometime next spring when WordPress is about to release 3.6, you’ll see an auto-update that will enable the new media uploader.